I sat on the steps of Grand Central Terminal lost in a constant stream of thoughts. Even though I am a Los Angeles native, the move to New York city alone was a huge move for me. As I sat on those chaotic steps at Grand Central Terminal, I felt all the emotions anyone could feel. I felt a sense of anxiety and confidence combined.

To be still in a world that’s in constant motion is a challenge. Surrender seemed elusive but I was on my way to peace.

Grand Central Terminal is an iconic destination in one of the greatest and fast-paced cities in the world. Since I was new to New York I came to walk around like a tourist. After satisfying my curiosity I decided to take a moment to pause. I was in a “pending” state of mind. I was anxiously waiting for pending news that I got the job or that I had secured the apartment.

Instead of being part of the hustle and bustle of the native New Yorkers, I decided to take a moment to “Namaste” — as I always say. I took a moment to look around and digest everything. I saw kids running, people hauling their bags and running to catch their train. I thought to myself, I used to be like that. I used to always be in a hurry.

One important thing I have learned in the city that never sleeps is to surrender. I was ready to surrender at Grand Central Terminal while I was in a pending state of mind.

Instead of following the current of a city filled with crowded streets, honking cabs and traffic jams I have learned to be still. In my moment in Grand Central Terminal, I was anxious but felt safe in my thoughts.

This was the first time I surrendered with faith and felt prepared for what the universe had in store for me. I surrendered to the noise, the traffic, the kids yelling, the chaos of the city and just let go. 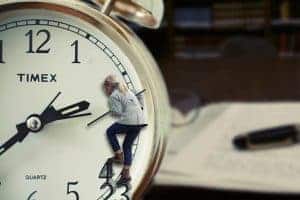 The feeling of surrender is one that is so peaceful, satisfying yet scary. We are not programmed in our generation to surrender to what life brings us. We’ve learned to plan and to follow the system that teaches us to hurry against time. I sat there against the grain of the chaos.  As footsteps ran up and down the steps to where I sat, I just felt like I was on my way to peace.

Surrendering doesn’t mean you are giving up. It doesn’t mean you are defeated by what is to come. Instead, you gain peace. Do your part by putting in the daily effort by starting your day with joy, love and gratitude and surrender for what is to come.  I held on to my faith and surrendered to what God and the Universe had for me in my new chapter in New York. I could feel it with all my heart. I was making room for an adventure where I would be filled with a life full of gratitude, curiosity and a hunger to live, and live fully.

We live in a world that is always in constant motion. Have you ever noticed that you didn’t stop to acknowledge the weather or notice if there were flowers blooming outside on the sidewalk of your building? I’ve been that person. I was always rushing in the morning as I wake up to emails and notifications, and rushing with my coffee in hand just to beat traffic. I didn’t even take the time to appreciate the sunshine, the rain or even the trees that provide shade on a hot summer day.

Why are you in a hurry girl? You will get there. Surrender.

Are You Ready To Cultivate Your Intuition?

7 Keys To Unlock Your Intuition

You have Successfully Subscribed!

Want To Cultivate Your Intuition?

Get your free guide:

7 Keys To Unlock Your Intuition

You have Successfully Subscribed!